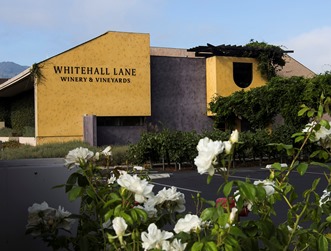 The prominent facade of Whitehall Lane Winery has been visible from Hwy 29 since 1979. Changes in ownership have reshaped it over the years.

From initial vineyard plantings on Whitehall Lane in the 1800's the evolution to today's Whitehall Lane Winery has been a story of vineyard. The first 25 acre vineyard property is the winery site, yet the definition of multiple Napa Valley sub appellations is formed in a wide ranging set of vineyards all showing unique profile and character in their wines.

The Lane simply refers to the valley road the winery sits on in St Helena, but it has played a role in the history of this property since the 1800’s. Over the decades the vineyard site on Whitehall Lane has been owned and operated by independent growers. For a period of time by Davis Bynum Winery and then by Howard Allen who was the first to try and locate a winery on the property, which was unsuccessful. Yet the vineyard remained.

The modern day Whitehall Lane Winery was originally started by Art Finklestein and Allan Steen in 1979 on the 25 acre site that had first been planted back in the 1800’s. They operated for over a decade before selling the winery and 25 acre vineyard in 1993 to Tom Leonardini Sr. The Leonardini Family has operated White Hall Lane since.

From the original Estate block the Leonardini Family have gone on to purchase a number of additional vineyards in the St Helena, Rutherford, and Oak Knoll sub AVA's of Napa Valley, and a Sonoma Valley vineyard. Totaling a combined 110 acres, that are well used to craft a series of wines, these vineyards and varietals that exemplify Napa Valley also showcase regional diversity.

When looking at Whitehall Lane it is a story of vineyards, like chapters in a book. There are seven key vineyards involved that run from Carneros all the way up to St Helena. Each one has been selected with great care to build the overall winery program being established by the Leonardini Family.

Winemaker Dean Sylvester joined the Leonardini Family shortly there after and has deployed a gentle hand and precious use of vineyard components to build a powerful series of wines. Some showcase the pure expression of their site, even their AVA, some combine the attributes of several to synergy.


The Estate Vineyard has a long history under many hands. The first grapes along Whitehall Lane were planted in the 1800’s but the current vineyard was replanted in 1994 when the property changed hands to the Leonardini family. Comprised of Merlot, Sauvignon Blanc and a rare small block of Orange Muscat, the soils here are of silty loam and clay with significant water at the foot of Spring Mountain.

Sauvignon Blanc was put into this zone and managed by more cropping which results in balanced fruit with classic acidity. Multiple harvests of the Merlot leverages each zone history on ripening. The Orange Muscat is rare for Napa Valley and produces a dessert wine of 8% residual sugar yet brimming with bright acidity.


The Leonardini Vineyard, considered the crown jewel, is located in St Helena just behind the Harvest Inn. This vineyard is best noted for its Cortina Gravelly Loam soils which drain rapidly and have presented tough growing conditions since the 1800’s. In 1989 it was replanted by Whitehall Lane Winery but when purchased in 1993 several wells and irrigation system were brought on line to serve 10 acres of Cabernet Sauvignon and 2.5 acres of Merlot. It has been noted in the critical world that this vineyard is the pure expression of St Helena ~ Napa Valley appellation character. Dean Sylvester describes the characteristics of this vineyard as dark fruit aroma and flavors with texture that are slow to unwind, tight at youth but lush core developing 7-8 years in bottle. If he had only one soil type to grow Cabernet Sauvignon in it would be these fine gravel loams.

On the East side of St. Helena, at the base of Dear Park Road and Silverado Trail, is the Fawn Park Vineyard. This block presents different soils, conditions, and different wine. A bit run down and limited farming when purchased, a rejuvenation project was implemented. Cabernet Sauvignon existed and Petit Verdot was grafted onto old root stock that had been planted but never grafted to variety clone. Red soils are more volcanic in nature and produce more rustic wines with bigger tannins. As a result this vineyards wines are part of the blending ‘tool kit’ as Dean Sylvester describes it.


It is certainly interesting to note the terroir difference of St Helena separated by not much more than a couple miles, yet same winemaking culture, produce unique expressions in the winery. Not all of these are visible to consumers as blending of these vineyard wines is common here, yet the winemaking team certainly tastes them in the vineyard and in production.

In Rutherford the Millennium MM Vineyard presents 20 acres of differing appellation, yet it is not much more than half a mile to Whithall Lane. Purchased in 2000, full redevelopment of this vineyard has been ongoing including a removal of 13 acres of Cab planted 6 years earlier to change initial north-south orientation, which was not producing good results, to east-west orientation. Multiple Cabernet clones are mixed into this vineyard, which are just coming to production. While not having a long standing profile of this block, once again differences are seen between Rutherford and St Helena.

Single vineyard wines of Leonardini Vineyard (St Helena) and Millennium (Rutherford) were crafted in 2005 and 2006. Sylvester describes the Rutherford as brawny, muscular with black fruit – classic Napa Cabernet Sauvignon, and the St Helena as fine tannin, elegant and tightly woven, yet not feminine.

Finding a mellow side of Napa, the Oak Glen Vineyard, along the Silverado Trail in the Oak Knoll district, was acquired in 1996. Gravel soils prevail and offer great drainage to the Napa River. This site was replanted, from previous Chardonnay in 1998, to Cabernet Sauvignon in the upper reaches and Sauvignon Blanc (Musque clone) on the western side, which is closer to the river. While Oak Knoll is well known for lush Merlot, the eastern side of the AVA and rocky soils allow Cabernet Sauvignon to come into focus in the view of Dean Sylvester.

The entire core of Whitehall Lane wines is found in these varied vineyards of Bordeaux varieties. The interplay of blends and single vineyard expressions has been the hallmark of this winery. Yet some variations have emerged.


Pinot Noir is a big one, which expands on the Chardonnay program from Carneros. Originally made for family, friends and events, the allure of Pinot finally overtook the Leonardini Family and production is now formal. And the purchase of a Sonoma Valley Cabenet Sauvignon vineyard, Rassi, which Sylvester sees as less extracted than Napa Cabernet, more fruity and softer in texture. It will be used in that “tool kit”.

For Dean Sylvester the best approach in winemaking style; ”hands off unless required”. Having a long history of working in Napa Valley, since 1983, he knows how to stay on the sidelines and let the fruit and vineyards speak. Being pretty laid back helps.


Amid all the discussion on the relevance of AVA and terroir, Whitehall Lane Winery vineyards provide an interesting opportunity to explore the diversity between the vineyards in Rutherford and the two in St. Helena.

Recognizing we all taste things differently and not equal, the concepts of Napa Valley sub appellation terrior can be considered across a range of Whitehall Lane wines by any and all who care to engage. For the past 20 years this winery has brought on multiple vineyard sites, established suited vines to those sites, and have results that now speak in volumes. Wine profiles match blends from approachable to more seriously structured and age worthy.

WineSmith 2004 Faux Chablis A fresh and dynamic white wine for those ready to make the move from the usual sweet and oaky offerings that we call chardonnay.